Pauline Topham died on 4th April this year in Tenerife. To the right is a picture of the tree 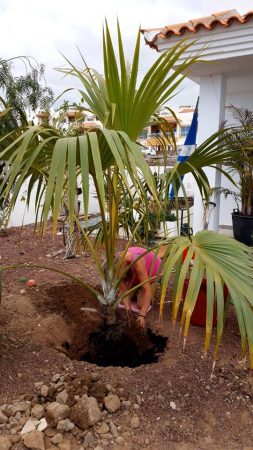 planted in Paulines memory by her good friend Pat Onions which NFBUK made a donation towards.

I can’t remember the first time I met Pauline. She appeared somewhere in my life and we became firm friends. Apart from sight loss, which was secondary in our lives, we shared a love of plants. Big ones, little ones, seeds and cuttings. She would holiday all over Europe bringing assorted bits back. Many ended up in my garden having been carefully wrapped into a jiffy bag and sent through the post to me. Most grew although some from the hot plains of Turkey refused to adapt to the Scottish climate … I never knew what would arrive.

A huge supporter of my campaigning she introduced me to the world of computers.
My campaign work had,up till then, been on the phone or face to face. I had no idea talking computers even existed let alone ever met one. She gave me the price of my first and Jane, as she was lovingly known, came into my life. Like Pauline…she transformed my world of illiteracy. Yes Jane, now mark 3, is still with me.

I can’t list all the memories but 2 stand out. The first when we took Perthshire local authority to a tribunal for failing to meet my needs as a blind person and carer. Pauline was my chief witness and between us we annihilated Perth – or at least their representatives. Things changed for the blind community after that. We worked together on so many battles.

The second was a conference in London on sight loss. 450 delegates attended from all over the country. Councils, social workers, charities you name it they were there. All sighted apart from Pauline and myself. We travelled down by train to London complete with sandwiches she had made. Excited, going to the big city we giggled lots. We shared a twin room and if you are blind it doesn’t matter. At the conference itself were all these sighted people exchanging ideas as to how they would help blind people. We sat there eyebrows raised, jaws dropped to the floor. They hadn’t a clue. I was a speaker and with Pauline’s help gave an insight into a sightless world. Silence. Shock. We were never invited back.

That evening we sat having a snack in the hotel bar. A young soldier came and chatted. Actually he chatted Pauline up. She blushed beetroot as I smiled! She was 80 something then and so flattered.

Pauline was a lovely genteel, quiet, friendly, interesting, helpful and generous individual. Pauline held a doctorate in fruit growing/production; various Open University qualifications, including fund raising. Pauline joined the NFB Tayside branch in the early to mid 1990’s. When Tayside branch closed, Pauline transferred to Scottish central branch, holding various positions at both branch and Scottish Area Council level. Pauline was always very active in promoting the NFB, its activities and membership to others. When it came to arranging events such as open public recruiting meetings, Pauline always carefully first sourced funding from external sources to cover the cost of hiring the room, providing tea/coffee and food, e.g., lunch etc., expenses incurred in attracting key speakers and any costs involved in bringing members to attend.

Pauline was exceptionally good in creating, producing and personally funding posters and postcards extolling the virtues of NFBUK, its work/activities and highlighting and encouraging public support for our various important campaigns.

In recent years, despite increasing ill health and infirmity, although Pauline was unable to undertake the various practical tasks she had hitherto carried out, she still never forgot us. Instead, she reflected on her generosity and increased her regular donations to our work/cause. One tiny example of her boundless, ungrudging generosity is her personal financial donation to cover the cost of buying the laser colour printer for the office –which can be used to produce small batches of individualised leaflets for different campaigns.

Thank you for everything you did for us Pauline!

Well done Pauline . May God keep you safe and well in his care and peace.

Tweets by NFBUK
By continuing to browse the site you are agreeing to our use of cookies.